Voting is INFECTIOUS! Buy screenplay via Amazon through June 30 in ALL GENRE SCREENPLAY CONTEST 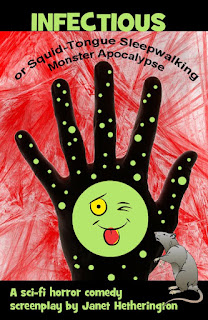 From April 1 through June 30, 2016, visit Amazon.com or Amazon.ca and download a digital copy or buy a paperback version of INFECTIOUS. Every purchase brings Janet a step closer to winning the competition.

If you buy a paperback copy of INFECTIOUS and bring it to a convention that Janet is attending, Janet will autograph it, give you a free gift and do a free sketch.


If you download a copy of INFECTIOUS and come to a convention that Janet is attending, tell Janet what you think at the show and she will give you a free gift.

Dross College isn’t known for its scientific research, but that doesn’t mean there aren’t any secret experiments going on. Journalism major Will Atman learns the awful truth when a strange creature bites his friends, his girl and his brother, causing them to sleepwalk and act out their buried dreams. They sing, they dance, they even do lab work… and they do it all while dead asleep. Can Will stay awake long enough to stop the spread of the monster squid-tongue?

From Janet Hetherington, creator of Eternal Romance, writer of the Elvira, Mistress of the Dark comic book and contributor to The Secret Loves of Geek Girls. 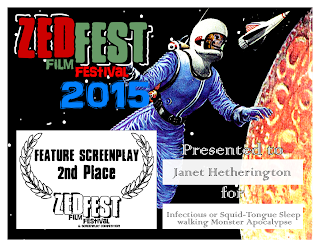 Thank you for supporting my work! -- Janet Hetherington